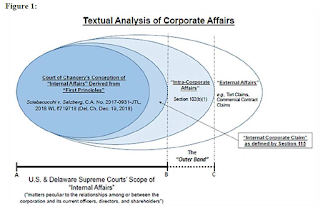 Salzberg v. Sciabacucchi (opinion linked here) presented the Delaware Supreme Court with a clash of policies regarding forum-selection provisions: Helping Delaware corporations avoid the inefficiencies in having to defend claims under the Securities Act of 1933 in multiple forums, state and federal, versus preventing those corporations from barring the state courts of Delaware (the Chancery Court in particular) from adjudicating cases involving the internal affairs of Delaware corporations. Carefully parsing pertinent language from statutes and case law—drawing distinctions among “internal affairs,” “internal corporate claims,” and “intra-corporate affairs”—the Court managed to preserve and promote the former policy while doing no harm to the latter, as it held Delaware corporate charter provisions that require ’33 Act claims to be brought in federal court, rather than the state courts of Delaware, to be facially valid.

The Federal Securities Act of 1933 authorizes private lawsuits, for failures to comply with the Act’s duties of full and fair disclosure in registration statements and other documents, to be brought in either state or federal court. The ’33 Act also bars removal to federal court of cases filed under the Act in state courts. 15 U.S.C. § 77v(a). And in Cyan, Inc. v. Beaver County Employees Retirement Fund, the United States Supreme Court recently made clear SLUSA didn’t change that. 138 S. Ct. 1061, 1078 (2018). As a result, ’33 Act defendants often found themselves litigating multiple iterations of the same claims filed in different state and federal forums, with no way to consolidate them in a single court.

The Court reversed the Chancery Court’s ruling that such FFPs ran afoul of “first principles” of Delaware corporate law and another provision of the Delaware Corporations Code, § 115, which bars bylaws or charter provisions that prohibit a plaintiff from bringing “internal corporate claims” in the Delaware state courts. Section 115 was enacted after § 102(b)(1) but did not expressly amend § 102(b), and so the Court concluded § 115 did not foreclose the FFPs in issue, even though they expressly prohibited ’33 Act claims from being brought in Delaware state courts.

Illustrating its reasoning in the diagram above, the Court explained that § 115 constrained only actions involving the “internal affairs” and “internal corporate claims” of Delaware corporations, but that ’33 Act claims were “intra-corporate claims” that lay beyond either of those first two categories. Nor, the Court said, were such claims purely “external,” like third-party tort and contract claims, that are beyond the purview of § 102(b)(1). Instead, the Court held, “FFPs regulating the fora for [’33 Act] claims involving at least existing stockholders are neither ‘external’ nor ‘internal affairs’ claims. Rather, they are in between in what might be called Section 102(b) (1)’s ‘Outer Band’” of authority—again, as illustrated by the diagram above. “[B]y creating a binary world of only ‘internal affairs’ claims and ‘external’ claims, the Court of Chancery superimposed the ‘internal affairs’ doctrine onto and narrowed the scope of Section 102(b)(1)—contrary to its plain language.”

The Supreme Court noted that its holding extended only to the facial validity of FFPs, and that any individual provision might not be enforceable “as applied” if, for example, it were the product of fraud or overreaching or for a variety of other reasons unique to that particular provision. Further, practitioners can expect debate about where various claims fall on the continuum of “internal affairs,” “internal corporate claims,” “intra-corporate affairs,” and “external affairs” of Delaware corporations. At present, however, Delaware corporations at least can deploy FFPs to shield themselves from the morass of multiple, parallel ’33 Act lawsuits in a variety of forums that cannot be consolidated in a single court.

Email ThisBlogThis!Share to TwitterShare to FacebookShare to Pinterest
Labels: Carroll

The Securities Litigation Blog reports on and analyzes cases and items of interest from around the country. It is produced and maintained by the Securities Practice Group of Carrington Coleman in Dallas.